Tony Hawk’s Pro Skater 1+2 brings back the most beloved entries in the Tony Hawk’s series, and with the capabilities of modern hardware, both entries have received a series of overhauls. In order to make this happen, Activision enlisted the help of developer Vicarious Visions, the studio that gave Crash Bandicoot a similar makeover with the N. Sane Trilogy back in 2017. The studio isn’t new to the Tony Hawk’s Pro Skater series, however, as it has been involved in the development of a number of Game Boy Advance and Nintendo DS titles. 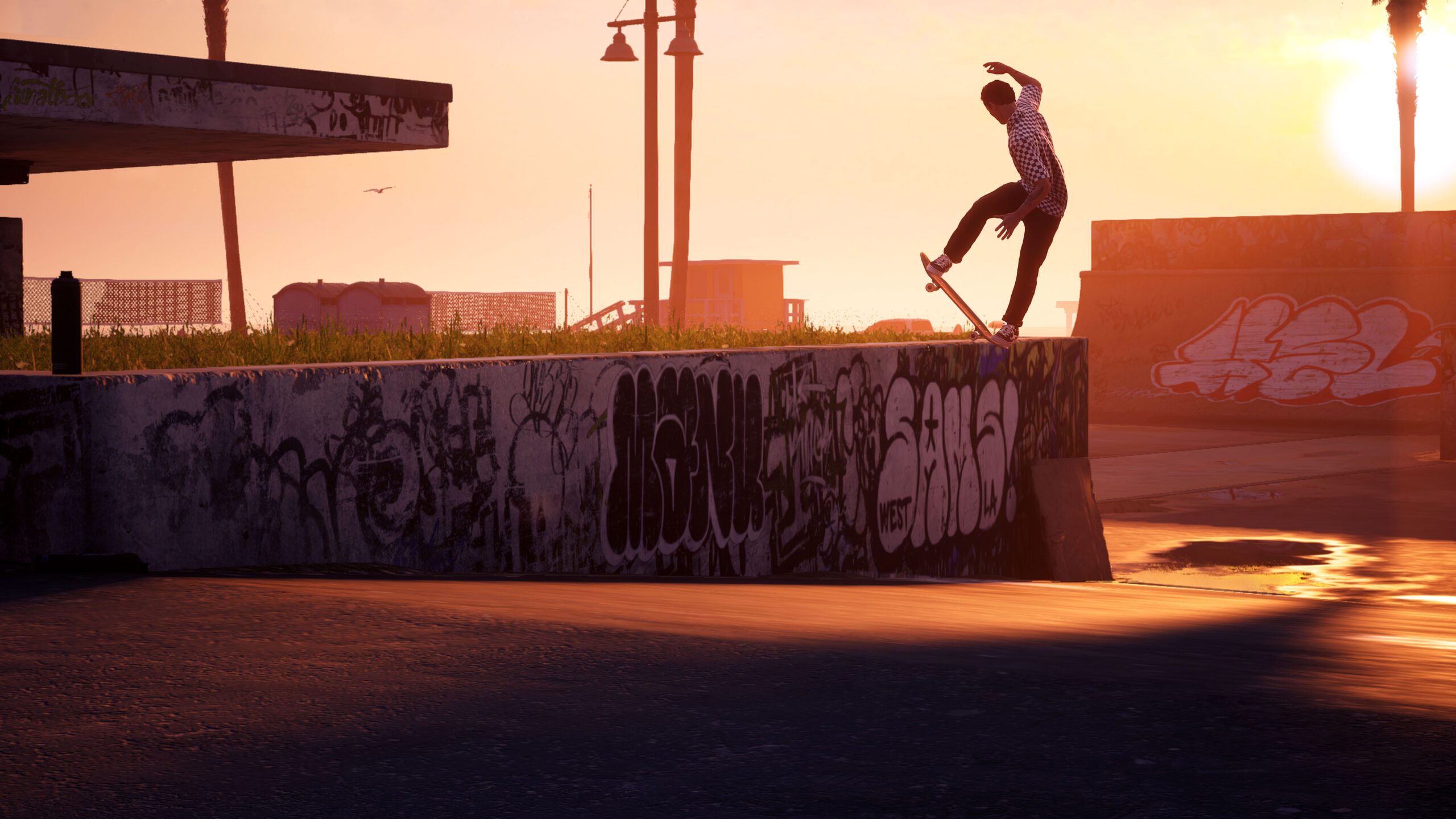 Vicarious Visions has done full justice to the visuals, as the facelift is instantly noticeable in the first few moments of the game. The lighting has been reworked, character models are far more authentic and realistic, and levels are more vibrant, and sport more detail than in the originals. The modern rendition is also a lot more responsive and fluid, thanks in part to a higher frame rate. There is, however, some inconsistency across stages, as some have received a greater amount of graphical improvements compared to others. Similarly, the soundtrack has received the same degree of attention as the visuals. Not only do the original tracks featured in Tony Hawk’s Pro Skater 1 and 2 make a return, but there are 37 brand new songs to go with them, resulting in a large selection of tracks to choose from.

In terms of gameplay, Tony Hawk’s Pro Skater 1+2 is somewhat of a hybrid of Tony Hawk’s Pro Skater 3 and Underground. Modern mechanics seen in the aforementioned games such as revert, wallride, and wallplant are present here, and they come in handy when attempting to chain and extend combos. Building up combos using tricks is still as engaging and enjoyable as it was before. Tony Hawk’s Pro Skater 1 and 2 purists do, however, have the option to switch over controls and move sets to how they were in the originals. 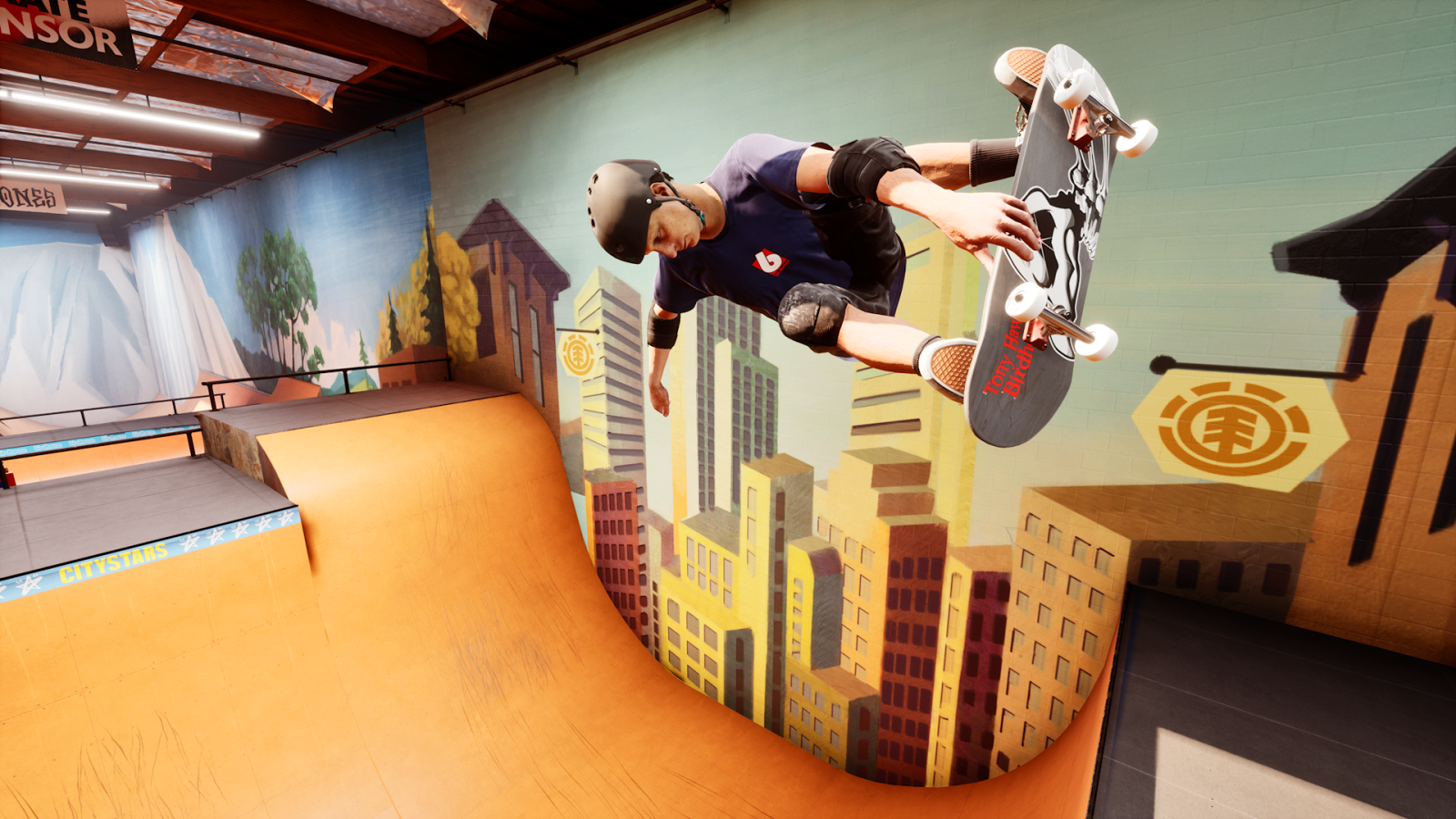 Much like the original games, Tony Hawk’s Pro Skater 1+2 game loop entails chasing high-scores. During the campaign, you have precisely two minutes to perform as many different variations of tricks as possible in the 17 different stages from the first two Tony Hawk games in order to maintain a high score. The stages themselves, while small by today’s standards, are appropriately sized for the two-minute restriction. There’s no way to extend the timer, making the barrier to entry somewhat steep for newcomers. It would’ve been nice to have seen Vicarious Visions go the extra mile and design larger variants of some of the classic stages along with more lenient time restrictions.

Additional mission goals range from collecting or destroying specific items to performing especially impressive tricks, such as jumping over three parked cars. They serve as a decent incentive to explore stages and experiment with your moves. The missions themselves quickly become repetitive, however, and some more variety would’ve done wonders here. It’s clear that Vicarious Visions wasn’t looking to deviate heavily from the originals, instead opting to maintain their classic vibe. There is, however, a new challenge system outside of the missions featured in the stages, and you’re rewarded with in-game credit upon completing them. The credit can then be used to buy cosmetic items from the shop. 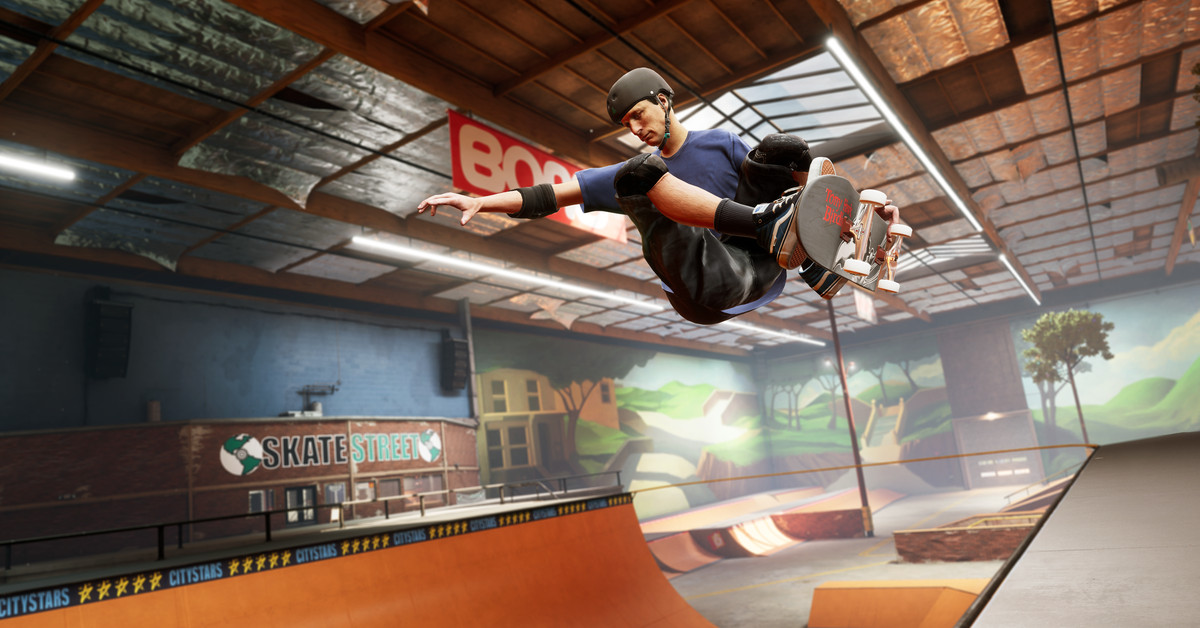 The ability to play online in the competitive mode adds tons of replay value to Tony Hawk’s Pro Skater 1+2 and is quite possibly the most important addition to the game. There’s even a split-screen mode for local competitive play between friends. There’s a decent selection of match types to choose from, including Score and Combo challenge, Trick Attack, Combo Mambo, Graffiti, and Tag.

It’s also worth mentioning that Vicarious Visions has done a great job integrating the PS5’s DualSense controller’s features into Tony Hawk’s Pro Skater 1+2. Haptic feedback support makes it possible for you to sense variations in your actions, such as when grinding down a slope or an even surface. The triggers offer resistance in certain situations, such as when landing after a big jump. It’s not intrusive and adds to the sense of immersion. Load times are noticeably improved on the PS5, and 3D audio support gives you elevated spatial awareness. 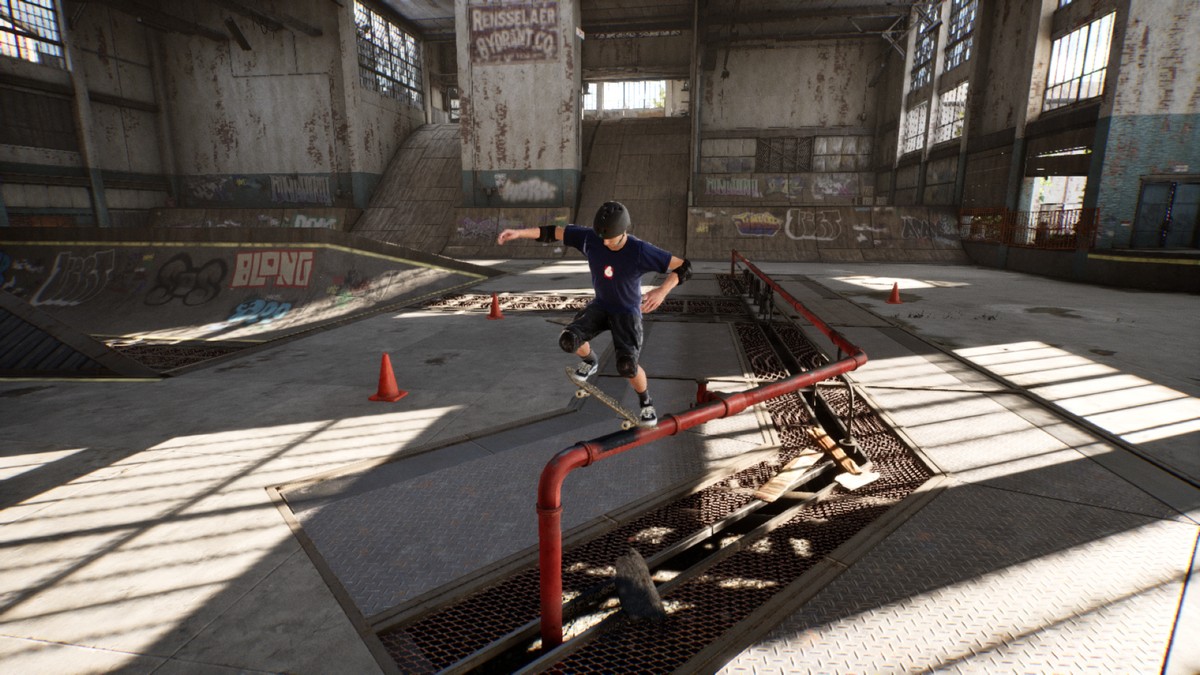 Tony Hawk’s Pro Skater 1+2 succeeds in modernizing the classic games from 20 years ago in some areas, while in others it shows signs of age. The positives outweigh the negatives, however, as chaining lengthy combos through wallrides and wallplants and competing online against friends considerably ramps up the fun factor. 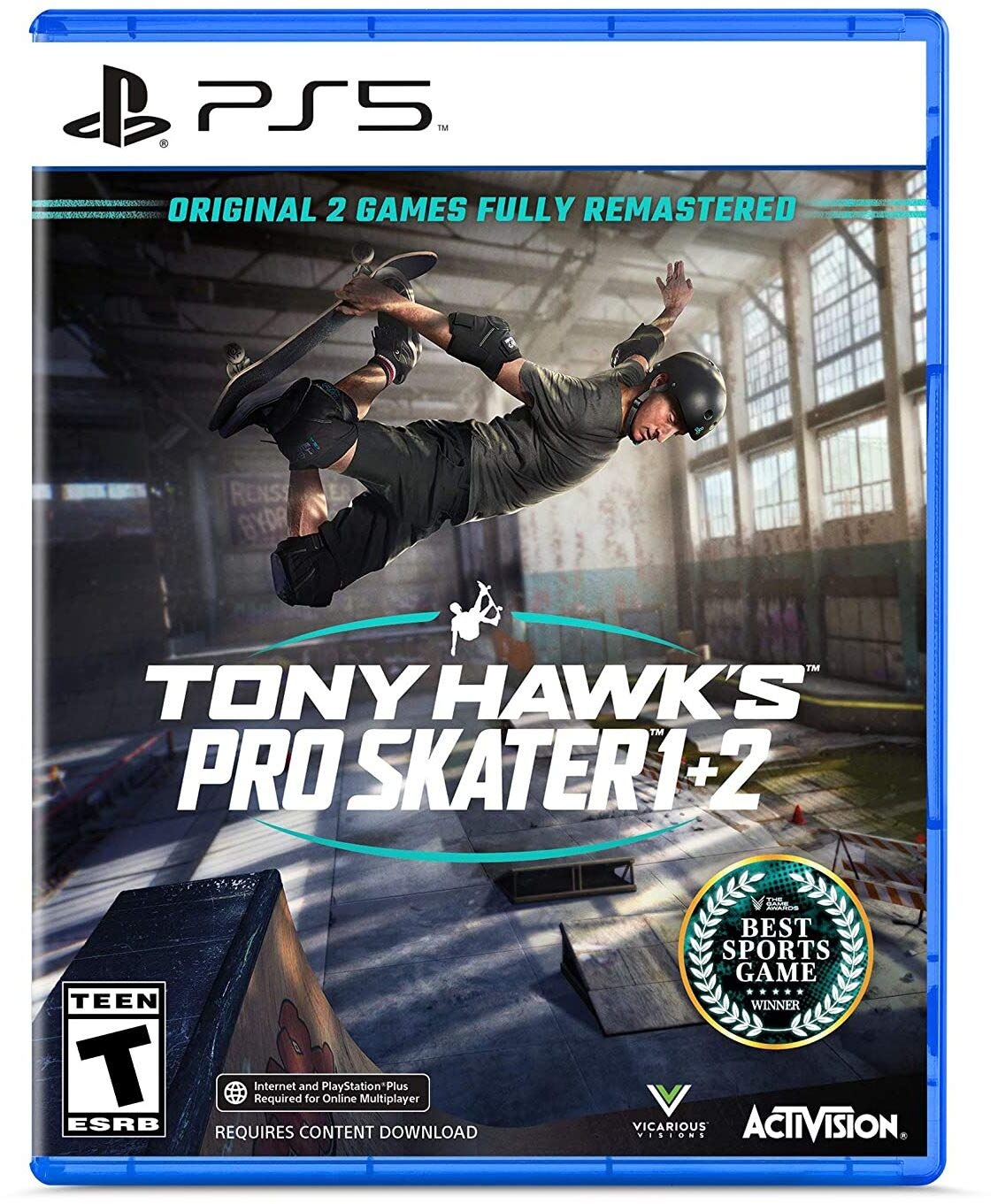 Despite showing signs of age in certain areas, Tony Hawk’s Pro Skater 1 + 2 makes some worthwhile improvements over the originals and successfully transitions the series to present times.