In 2020, Cyberpunk 2077 was one of the most talked-about games, but not all of it was positive. The game performed admirably on PC, where it was not hampered by technical limitations, but on consoles, it suffered a fate rarely seen in the industry. The outrage over the PS4 and Xbox One versions was so intense that the game was removed from the PlayStation digital store for an extended period before being reintroduced after multiple updates.

Following the disastrous launch of Cyberpunk 2077, CD Projekt Red has taken the time to polish and release a polished version of the game to improve its appeal. They had already hinted that a PS5 and Xbox Series S|X version would be released later in 2021, and while that has been pushed back to early 2022, it has helped them get the game to a point where it is highly enjoyable. Even if there are some flaws and this is not a perfect experience, it ends up feeling like a completely different game now. 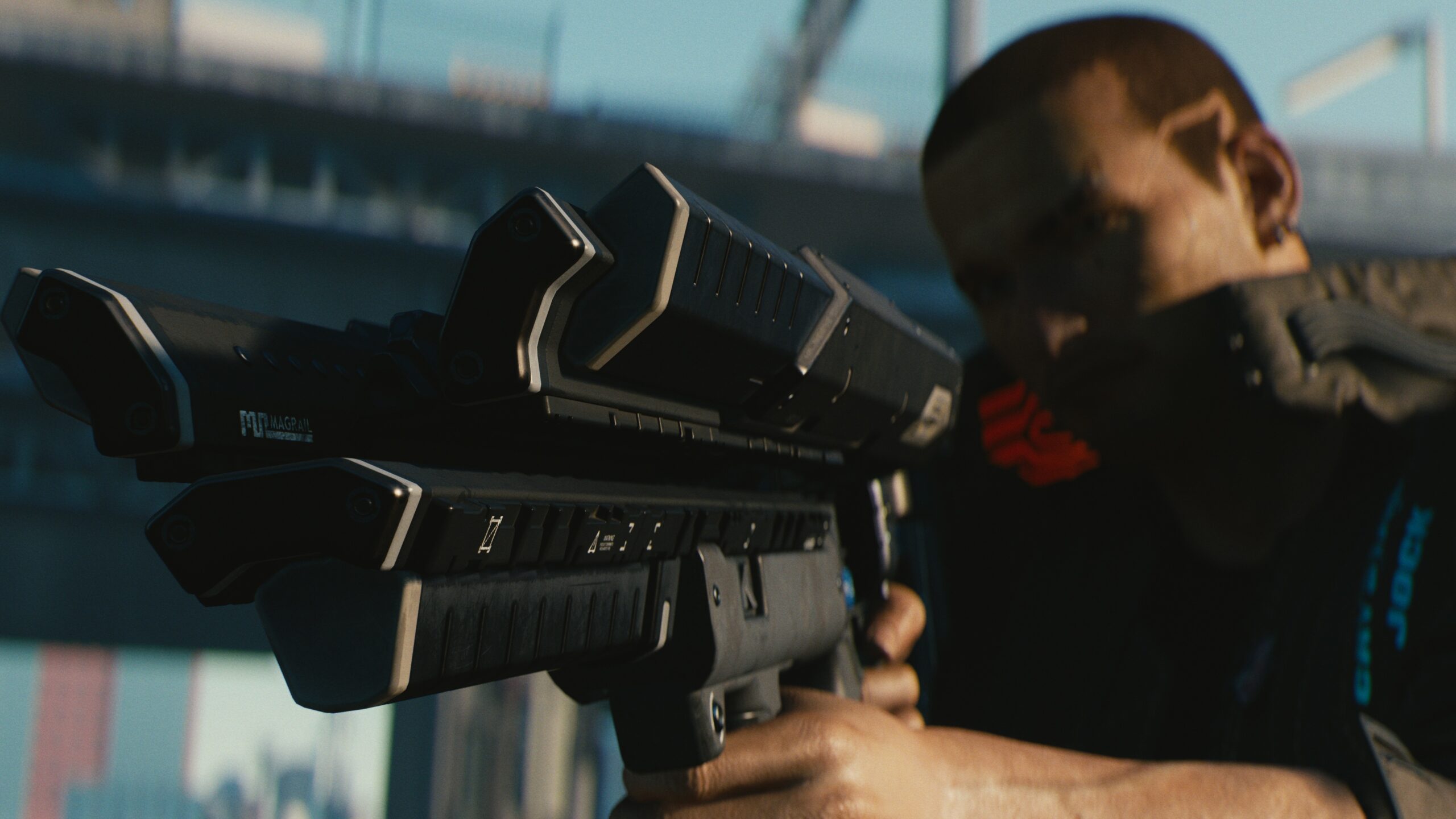 Much has been said about the game, but what has changed with this new upgrade? The emphasis and marketing have always been on the visuals and performance, but they were not the worst aspects of the original release, at least on the PS5 and Xbox Series S|X. What has changed since the game was able to run in backward compatibility mode at 60 frames per second? It is the overall improvement to each aspect of the visual quality that stands out the most. The increase in resolution is noticeable here, making the image appear crystal clear, and the improvements to the shadows and reflections are quite noticeable.

The ray-tracing support is one aspect of the upgrade that I find disappointing. While I never expected the PS5 or Xbox Series X|S versions to match the PC version in this regard, the lack of ray tracing for reflections is still disappointing. Instead, the emphasis has been placed on shadows. This is more noticeable in indoor environments, which now appear fully immersive rather than providing artificial shade. However, it is less common in outdoor settings, so I don’t consider it necessary to enjoy the game. 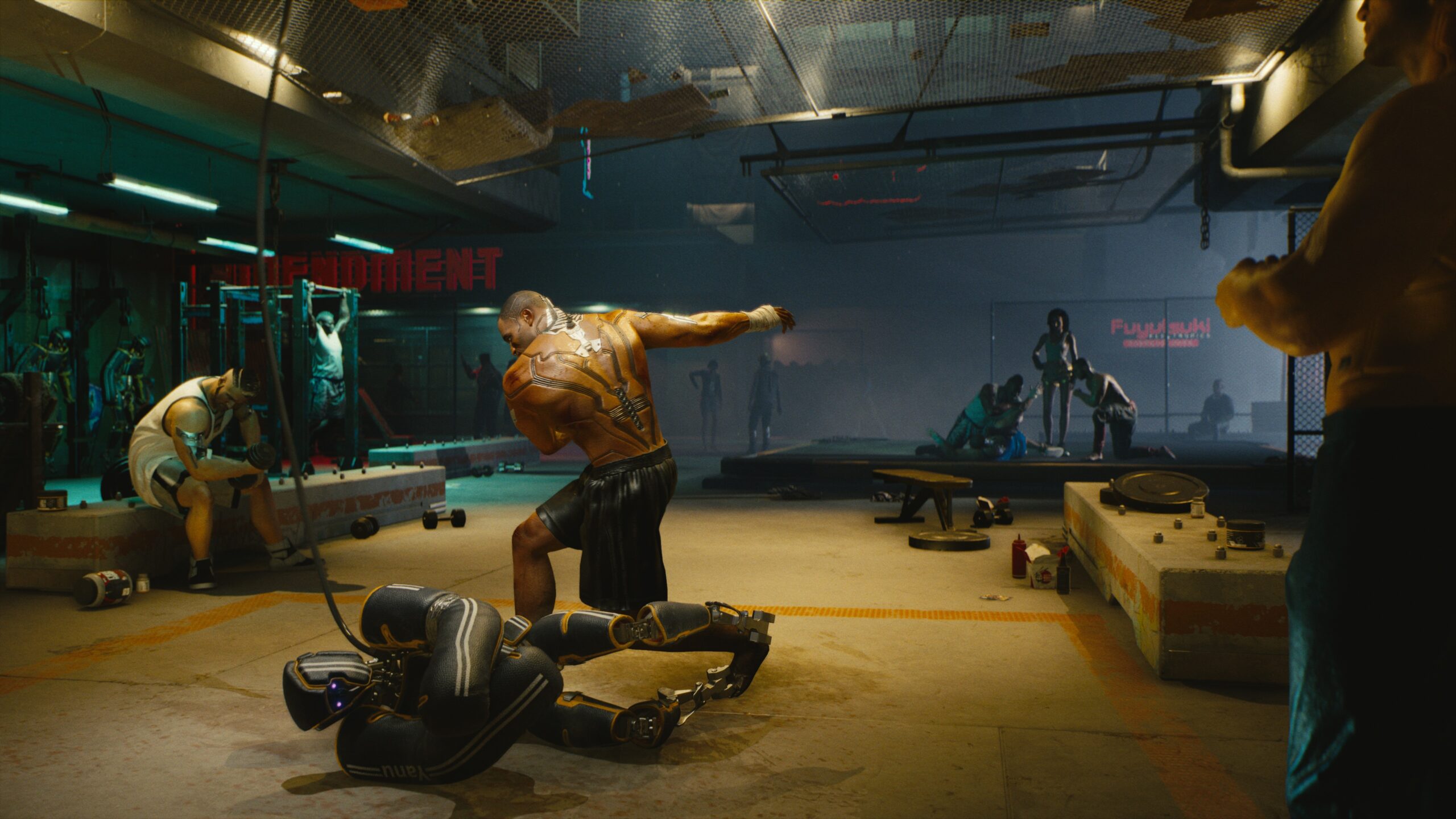 The developers chose to provide options by allowing the user to toggle between a performance mode and a ray-tracing quality mode. The performance mode disables ray-traced shadows while increasing the frame rate to 60 frames per second. It’s surprisingly stable here, and the game feels perfectly playable in this state. This is the mode I chose during my playthrough, and I believe it improves the experience significantly because the ray-tracing quality mode runs at 30 FPS.

The technological advancements do not stop here. The HDR quality has been enhanced, making the colours pop out while driving in the Night City. I’ve always admired the city’s aesthetics, with their ultra-futuristic Cyberpunk look, and they now look even better with the new coat of paint. Another previously reduced effect was crowd density, but it has now been significantly increased, making the city feel much livelier than before. 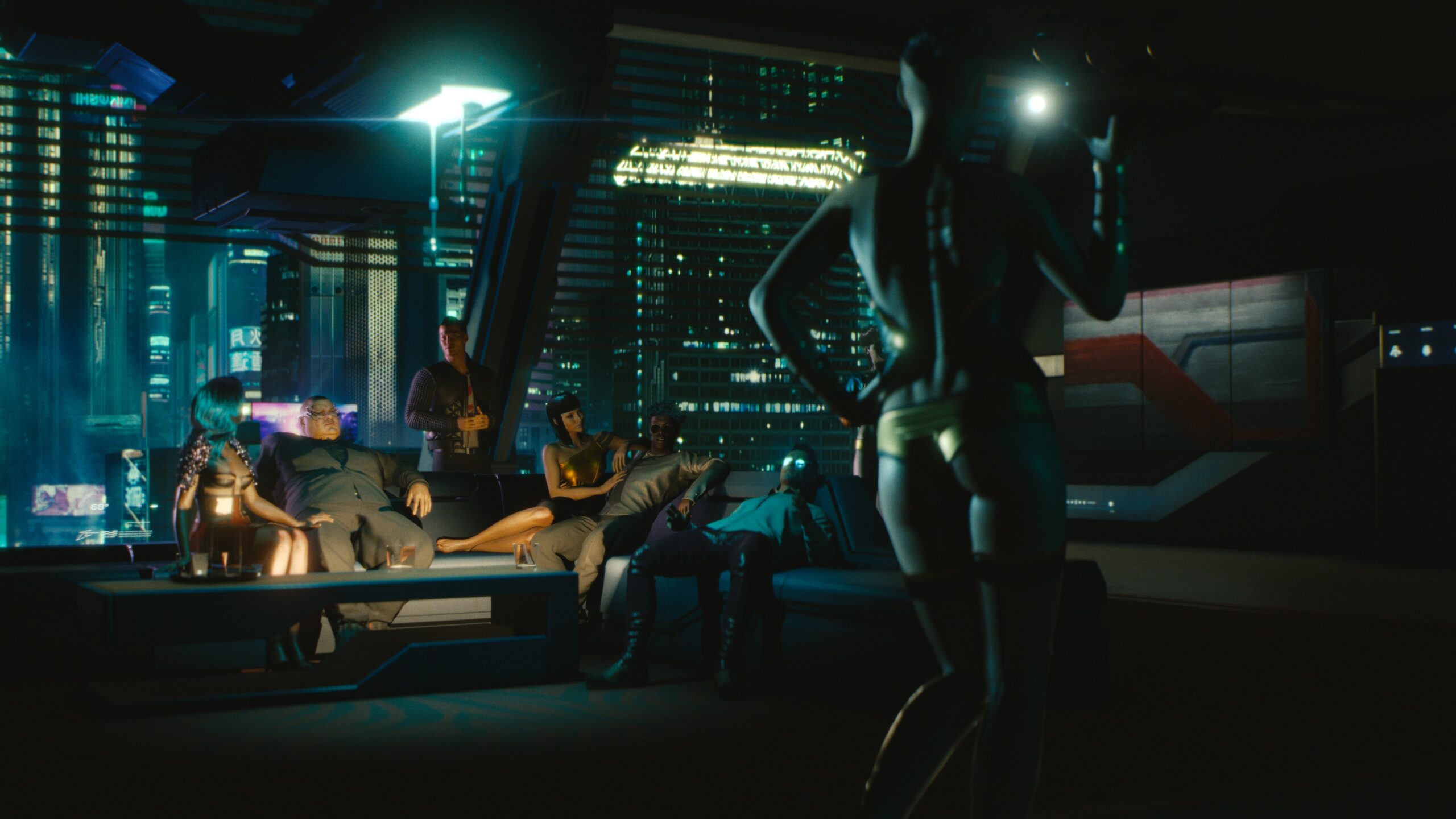 Cyberpunk 2077 was not only chastised for its poor performance but was also riddled with bugs, some of which could potentially halt progress. The majority of these have been patched since then, but some remain. Even though this upgrade provides the most stable version of the game, I was still able to encounter some bugs with NPCs where they were stuck in a glitch and unable to move, or the physics around them went ballistic. These glitches do tend to break the immersion of a visually stunning game. The AI has also been improved so that it now behaves naturally rather than going haywire or appearing out of nowhere. This reduces the number of silly bugs that appear while driving around Night City.

A slew of new enhancements has been made to the game to make it look more like an RPG than a first-person shooter. First and foremost, allow me to clarify something. Cyberpunk 2077 is a bad first-person shooter with even worse melee combat. It doesn’t have the same level of combat intensity as its genre peers, so a revamp of the in-game systems to provide a more streamlined RPG experience stands out a lot more. This, in my opinion, improves the game’s flow and helps it establish its own identity. This is no longer merely a GTA clone, but rather a competent first-person RPG with solid writing and excellent world-building. 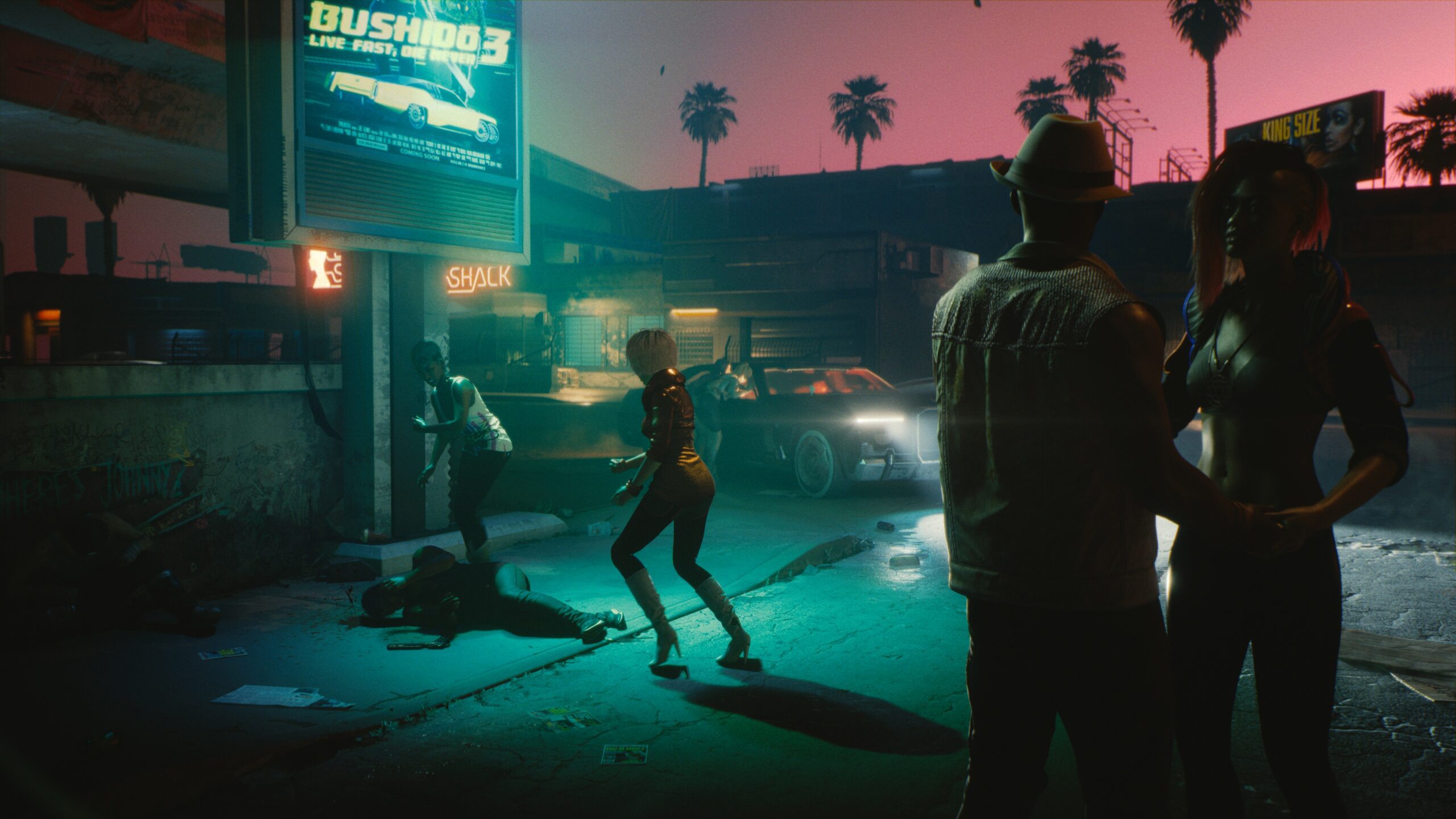 Is Cyberpunk 2077 finally becoming the game that CD Projekt Red promised? I don’t know how to answer this question. This is a substantial upgrade that brings the game much closer to its original vision, but it falls short. Perhaps with a sequel, we will be able to enjoy a game set in the Cyberpunk 2077 world that is not hampered by technical limitations or a botched launch but now is not the time.

If you’re looking for a competent first-person RPG, I highly recommend giving Cyberpunk 2077 a shot. The new visuals and improvements are also worth a replay, and because the game offers three different life paths, you can always try a new game, in the beginning, to get a unique experience for a replay. 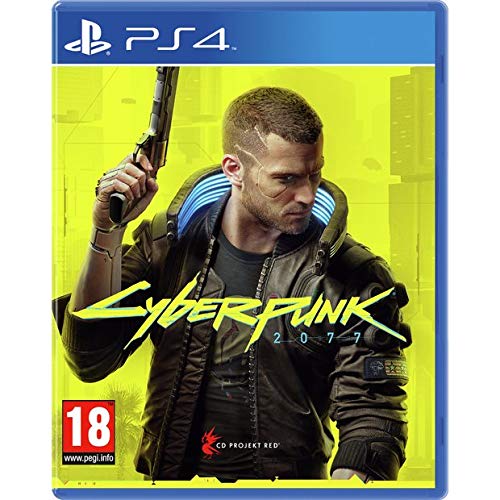 After a disastrous launch, Cyberpunk 2077 has transformed into a competitive first-person RPG, proving it had potential but was simply poorly executed.