The Season 3 of Sea of Thieves features the Sunken Pearl a Tall Tale, which has a huge crossover with Disney’s Pirates of the Caribbean, as most fans are already aware.  This is the second of five Tall tales that make up A Pirate’s Life, the season’s story campaign. You will need to go in search of Captain Jack sparrow’s ship, the Black Pearl after you have finished the campaign’s titular first task. The only snag is that it’s now located in the Sunken kingdom, which is located at the ocean’s bottom. To collect what you need from the Pearl, you will have to travel through Siren Spire, where you have to solve puzzles (and possibly fight enemies) in order to progress through the tower’s level. In this guide, we will help you to solve all the puzzles of the Sunken Pearl a Tall Tale in Sea of Thieves.

When you first visit Siren Spire, The Mysterious Voice who has guided you this far reveals herself to be far less pleasant than she previously appeared, summoning some Ocean Crawlers to fight you. Using your weapons of choice, you must destroy the waves of these enemies. They will drop a Siren Heart after you defeat the last one.

Pick this up and make your way around the cavern’s Siren Statues – there are four in total, one of which is larger than the rest. Follow the prompt to Return Siren Heart when you reach the one with an empty cavity in its chest. If you look around the cavern, you will notice a bright mural portraying four Sirens who resemble those sculptures, They are from left to right:

You must reposition each statue’s arm such that they are holding their tridents in the position indicated by the mural in order to solve this puzzle. Just keep in mind that the angles depicted in the mural are a little deceiving; for example, the trident held low in the mural should actually be angled down towards the statue’s floor. 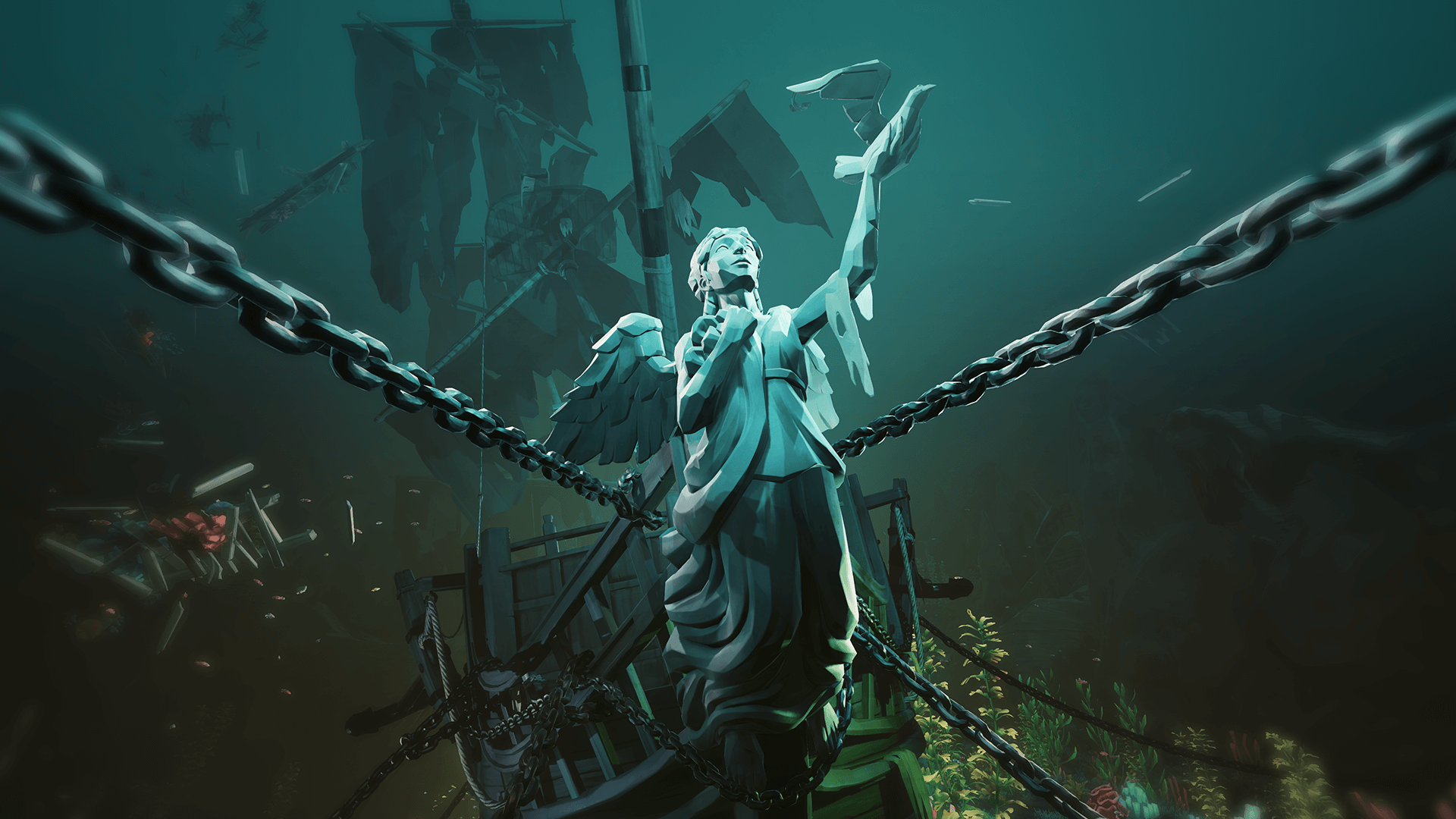 Smash the statue’s arms with your weapon of choice to interact with them. If you are still unsure about positioning, rotate each statue arm a few times until you understand how they relate to each other. After you have positioned the statues, attack the giant statue with the conch in the cavern’s center with your weapon. If your response is accurate the cavern will slowly fill with water, allowing you to advance to the next level.

The good news is that the second puzzle is nearly identical to the first. Even the sculptures will remain the same. But due to the new water level in the cavern, you will be doing the same thing again, but this time underwater.

(It’s not that difficult: simply keep gulping down any air bubbles you pass to keep your oxygen levels up, or resurface if you really need to.)

On this level of the cavern, there’s a new mural, but it’s simple to remember: each of the three smaller Sirens is gripping their trident at its tallest point. This means that the tip of the trident on the statues must point back over their shoulders.

Swim to the bottom of the last level, reposition the arms on the three lesser statues, then bash the main statue so it blows on its conch once again. This time, instead of rising the entire water level, a single geyser erupts directly in front of the mural you used to solve the latest challenge. Take a crazy ride to the next level by standing on it!

When you reach this level of the tunnel, you’ll be attacked by two more waves of Ocean Crawlers. When the last one drops, make sure to get the Siren Heart. This level includes a new mural as well as a new set of sculptures, so look for the one lacking its heart and replace it.

The following are the Sirens in the mural this time, from left to right:

The only difference between this puzzle and the previous two is that one of the statues is up on a ledge above you, out of reach of your melee or short-range weapons. Fortunately, there’s an armory box nearby, so you’re not trapped if you forgot to bring the proper gear.

Interact with the huge Siren statue to make it blow its conch once again, and the cavern will begin flooding again if you did it correctly. Allow yourself to float gently upwards on the increasing water. On the new level, when you reach dry ground, you’ll notice a ramp fashioned out of what appears to be the spine of some enormous aquatic mammal rising up further higher.

Climb the skeleton, then hop up the improvised steps until you reach a landing with a mermaid checkpoint statue and a shimmering barrier.

When you’re ready, use your weapon to hack through the barrier. You’ll find yourself in a sort of observation room at the top of the Spire, where the Mysterious Voice will disclose her actual name and deliver a typical villain speech, all while a Kraken-like creature orbits menacingly outside.

When she’s finished, cut through the barriers to keep the room dry and you’ll be back in the water. It’s time to get back in control of your air bubbles. You’ll need to beat multiple opposing Sirens in a fight before you can move again. The final one you destroy will drop another Siren Heart, which you must collect from wherever it falls.

Take out Jack’s Compass and follow it to a rock wall with a Siren face carved into it and a statue on either side. Place the Siren Heart in the right-hand statue’s empty chest.

Returning your attention to the Siren’s face, you’ll discover a familiar section of mural on either side, suggesting that both sculptures’ trident arms should be moved to the center position. Once you’ve completed this, swim up to the ledge above the left statue and interact with another Big Siren Statue using Conch.

When you get this right, the cave wall with the Siren face carved into it will fall, giving you entrance to the Sunken Citadel and the quest’s next stage.

That’s everything you need to know to solve all the puzzles of Sunken Pearl in the Sea of Thieves.

Back 4 Blood All Supply Lines and Where...

Metroid Dread First EMMI and How To Defeat...

Metroid Dread Phantom Cloak and What To Do...

Metroid Dread: What To Do If You Are...