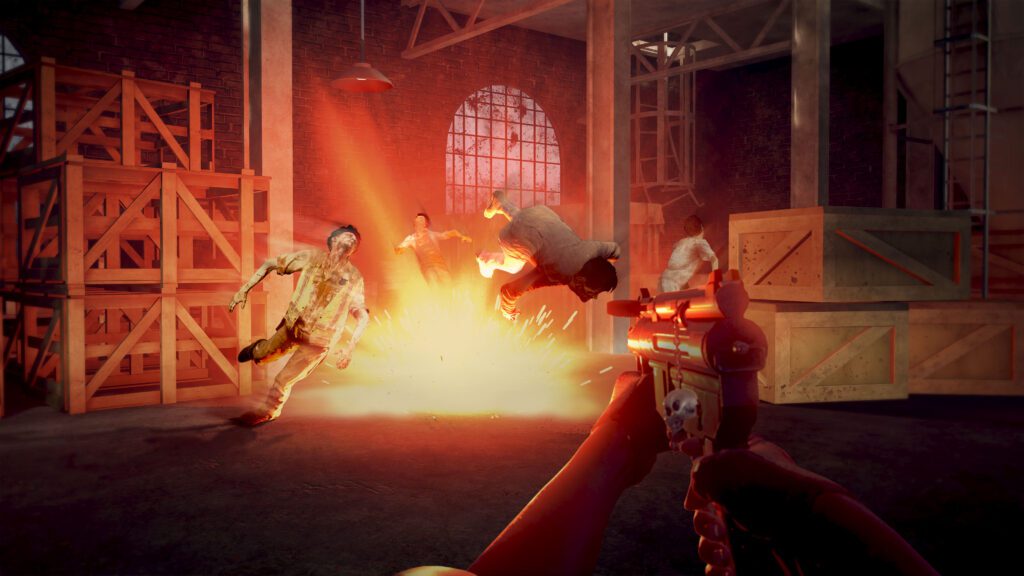 Survios Inc has released a major update patch for The Walking Dead Onslaught. This does an overhaul of the gameplay elements as seen in the patch notes.

The game appears to have received a massive overhaul with this new update. Ranged and Melee weapon combat has been overhauled. Progression eased along with various other changes as mentioned in The Walking Dead Onslaught 1.05 update patch notes.

Significant ranged weapon combat overhaul
– All ranged weapons have had their damage values tuned to allow for one-hit kills to the brain at close range; less damage is dealt to the jaw and significantly less damage is dealt to the neck and below.
– Ranged weapons now have custom fall-off damage over distance, which can be improved via weapon upgrades (“Refined Powder”). The Lever Action Rifle, Revolver, and Crossbow do not have fall-off damage.
– The “Copper Tips” upgrades for the Heavy Pistol, Lever Action Rifle, and Crossbow are now more effective; penetration values have been increased.
– The Basic Pistol is now less accurate at range to compensate for its new one-hit kill capability.
– All ranged weapons have had their maximum ammunition and upgraded maximum ammunition capacities re-balanced to the new weapon damage values.
– Ammo Pickups now grants less ammunition per weapon, increasing ammo scarcity to promote alternating between different ranged weapons.
– Ranged weapons brought into a Scavenger run as part of the player loadout now start with a single magazine’s worth of ammunition rather than the maximum for the weapon.
– The ammo bonuses granted by The Forge have been increased from +40% at max level to +125% (+25% per upgrade).
– Increased blunt melee damage on all ranged weapons (pistol whipping).
– Simulated weight on heavier / longer ranged weapons has been adjusted for better usability; this weight can be neutralized by stabilizing (two-handing) a weapon.

Significant melee weapon combat overhaul
– All melee weapons have had their damage values tweaked; less damage is dealt to the jaw and significantly less damage is dealt to the neck and below.
– Sharp melee weapons (blades and axes) now stick inside of a Walker’s skull on kill, and must be manually yanked out; higher quality sharp melee weapons such as the Katana and Battle Axe do not get stuck.
– Dead Walkers no longer automatically detach from sharp melee weapons when impaled.
– While impaling a Walker with a sharp melee weapon, player movement is restricted for as long as the weapon remains stuck in the Walker.
– Additional simulated weight has been added to heavier / longer melee weapons; this weight can be neutralized by stabilizing (two-handing) a weapon.
– Reduced blunt melee damage for sharp melee weapons when striking with the hilt or other non-sharp surfaces; the Crowbar, Battle Axe, and Shovel have retained higher damage for these blunt attacks.
– The Knuckle Knife has been completely retuned to better emphasize blunt damage (two-hit punch to the head, one-hit when upgraded); the knife end is no longer an instant kill head strike but also does not stick in skulls on kill.
– The “Impact” upgrades for the Hammer, Bat, and Battle Axe are now more effective; explosive damage values have been increased.

Progression has been eased
– Added more Food to the early game for smoother level progression experience.
– Changed the Scavenger site played in the first time user experience from “Main Street” to “Military Checkpoint”.
– Reduced the speed of the Scavenger Herd Wall when playing on Novice or Survivor difficulties.

Other changes
– Reversing grip on a bladed weapon will no longer cause a choked Walker to detach.
– Choked or impaled Walker corpses have increased simulated weight, but no longer automatically fall to the floor.
– Increased velocity on thrown Walker corpses to improve player’s control of the throw.
– Choked Walkers can now be brought closer to the player’s face.