Metroid Dread First EMMI and How To Defeat All E.M.M.I

The First EMMI that you encounter in Metroid Dread can prove to be quite challenging. Find out how to deal with all E.M.M.I in this guide.

Metroid Dread has introduced its players to new and staunch kinds of adversaries known as the E.M.M.I. There are a total of 7 E.M.M.I’s all with their quick-witted idiosyncrasies. These robots are scattered all across the map in their enemy zones guarding their allocated areas. They are equipped with good gears, which you will get after beating them down.

The abilities that these robots possess are made for Samus by the Federation. As soon as the robots notice Samus follow her and specifically the Federation has made them destroy Samus. They are made with keen observation and powerful skills. Their one strike can put an end to Samus’s life and that is nearly impossible for her to resist the blow.

How To Get Rid Of These Quirky E.M.M.I Robots?

These creepy monsters are dwelling on the major locations of the game that you can not skip progressing the game. You have to face them every time to go further in the game. Each of their dens has special secured entrances with unique defending styles, so if they see you, the entrance will shut down immediately until they lose sight of you. Use your sensor Phantom Cloak ability to sneak through the red zones. But that needs to be dealt with smartly since it drains out more rapidly by Aeion gauge when Samus is moving so you can stay still in the areas where it’s possible and let the danger pass by before you make your other moves.

You can also tackle them if you know where the Central Unit is located. To find its location with head to the map room. Once, you have found the Central Unit, destroy it and the Omega Cannon will be unlocked for some time. This is the only powerful weapon with Samus to deal with the E.M.M.I’s. 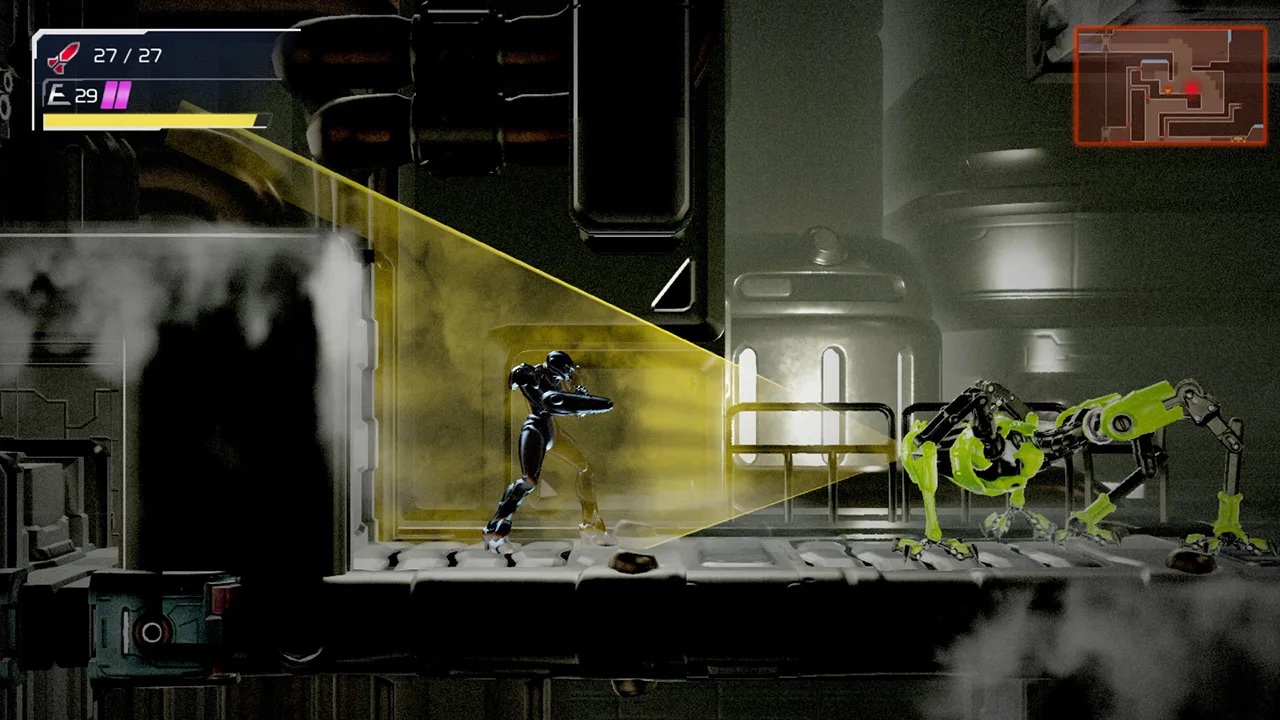 How To Deal With First EMMI In Metroid Dread

This is the First EMMI that you encounter in Metroid Dread and acts more as a tutorial. This EMMI-01 tends to appear more as a tutorial than a real threat. The first one doesn’t have any ability so even after finishing it off, you won’t get any. You can simply take it down by using Omega Cannon.

The second one has a spider climbing ability so even if you try to run on the ceiling or any of the walls, you can get out of its sight because He’s Coming After You. To knock it down, find the Omega Cannon and melt the faceplate that is protecting the EMMI 02.

This Robot has the Spider Magnet ability, so the better way to defeat it is by crawling into the low space areas and getting enough time to shoot it. But you need to drop your second attack on its faceplate instantly else, it will cost you a greater time once it cools down. Finishing this one-off will award you the Spider Magnet ability to climb up the ceilings and walls.

This one is a real threat, without a joke. It can run through large areas with greater speed and can thrive in low space or crawling areas instantly. This frantic EMMI is a little tough to dodge but you can kill it by melting its faceplate and going in the crawl spaces and jumping off from one place to another is yet a way to play safely against this EMMI-04 Robot. Overthrowing this one will unlock the Speed Booster ability.

EMMI-05 has just a wonderful ability of freezing. It can freeze you anywhere and anytime as soon as it catches you. It is extremely easy for it to kill you then. It has the Ice Missiles ability so to destroy it, you have to be quick while shooting its faceplate before it gets cold. To tackle it, use Phantom Cloak regularly. You will ultimately unlock the Ice Missiles ability to freeze the upcoming enemies your way.

Okay! Things are getting fishy here. This EMMI-06 blows a fire beam that goes straight away through the fire and knocks Samus senseless. It has a wave Beam Ability. As compared to the EMMI-05’s Ice Missile ability this one’s a bit slower in deploying the attacks so longer spaces between you and it can be a beneficial source of dodging its attack. That is how you can defeat it and unlock the Wave Beam ability.

It deploys the Plant explosives that can tear down nearly everything that is being surrounded at the moment. It has the Power Bomb ability. Demolish the last EMMI-07 to unlock this ability for Samus and Enjoy the adventure.