The Ratchet & Clank series is known for letting players fire some of the most innovative weapons in all of gaming, in addition to its Pixar-like visuals, exploding set pieces, and scratching comedy. In Ratchet & Clank Rift Apart it’s all the same just like the previous games of the series, it has a whopping 20 guns for you to upgrade and enjoy.

You will want to learn everything you can about each gun, with so many weapons at your disposal, so that you can master it as quickly as possible. As you won’t be able to upgrade all the 20 weapons in a single playthrough, so in this guide, we will help you to choose which Ratchet & Clank Rift Apart weaponry is best for your playstyle and which to level up first.

How To Unlock All Ratchet & Clank Rift Apart Weapons

In Ratchet & Clank Rift Apart, you will have to go to the store and pour large amounts of Raritarium into the correct slots to upgrade your weapons, just like in the 2016 reboot. You will come across this resource frequently while progressing through the story. The more you use your weapons naturally to level them up, the more hexagonal grids you will be able to unlock and connect to gain access to more buffs. These range from a wider blast radius and enhanced ammo clip to simply increased damage. If you want to earn unique bonuses instantly, you will have to first unlock the perks located surrounding any orange grids.

Here is the list of all the 20 weapons, along with their locations and benefits in Ratchet & Clank Rift Apart:

In Ratchet & Clank Rift Apart, the Burst Pistol is the very first weapon that players will get at the start of the game, and it’s Rift Apart version of the trusty pistol with a high fire rate that’s become standard in most Ratchet & Clank games. It becomes the Blast Pistol when you upgrade it to level 5. This weapon is good for landing lots of rounds quickly and hitting the enemies from a distance.

The Enforcer is the closest thing you will find to a shotgun, it allows you to fire one shot with a half-press of the R2 trigger or two shots in rapid succession with a full squeeze. It allows you to deliver a lot of damage to anyone trying to intrude on your personal space early on in the game. It becomes the Executor when you upgrade it to level 5 allowing you to fire a quadruple barrel instead of double. This weapon is good because it allows you to breathe easier and disperse closely-packed groups of foes. 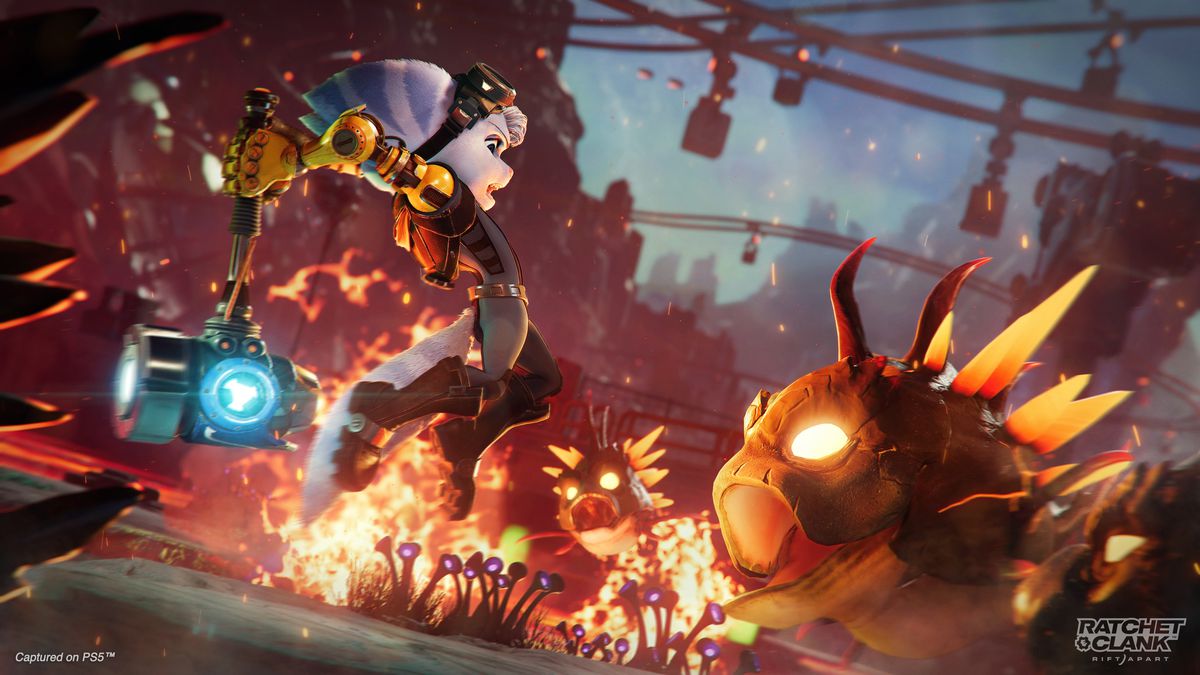 A Ratchet & Clank game mayIt’s not possible that a Ratchet & Clank game doesn’t have some sort of bomb glove. In Ratchet & Clank Rift Apart it is known as Shatterbomb, and it’s great for doing a lot of damage to a small group of enemies or reducing the health bar of any larger enemies. It becomes shutter last when it reaches level 5. This weapon is good because it targets a specific area and causes a wide blast radius of damage.

In Ratchet & Clank Rift Apart, Mr.Fungi a brand-new attack companion has replaced Mr. Zurkon in your weapon wheel. He’s more than willing to have a blast firing at enemies you can’t reach or providing fire support while you focus on something else. You can send out up to five Mr.Fungis for help at once without any of them disappearing. Each Mr.Fungi is joined by his wife, Ms. Fungal when you have upgraded him to level 5. This weapon is best because when you are focusing on more immediate threats it provides extra firepower.

For the most part, the Negatron Collider is as badass as it sounds, blasting a single beam of charged energy capable of passing through many enemies at the same time. However, because the charge doesn’t last indefinitely, you will frequently be compelled to switch to a backup weapon because the clip capacity isn’t particularly vast, to begin with. When you upgrade it to level 5, it becomes a Large Negatron Collider, which triggers a huge explosion after the charged shot is completed. This weapon is good because if the enemies form a single line in front of you, you can wipe them out instantly.

The Topiary Sprinkle is not as entertaining as the Groovitron from Ratchet & Clank (2016), however, it does the same job. Simply throw one of these within range of a large enemy group, and they will be drenched with water, which turns them into topiaries instantly. For a short while, it freezes the enemies in place allowing you to fire off a large number of shots without much risk. It also works on bosses amazingly. This weapon is good because it temporarily locks the enemies in one place to keep the pressure off.

Richochet is one of the most inventive weapons to appear in Ratchet & Clank Rift Apart. Ricochet lets fling a large metal ball into the air and repeatedly attack any chose enemy with just a few squeezes of R2. This is very useful when far-off enemies are sniping you and you want to stop them, but it’s also great for destroying small groups in a short amount of time. This weapon is good because it gives you some breathing room by interrupting enemy attacks. 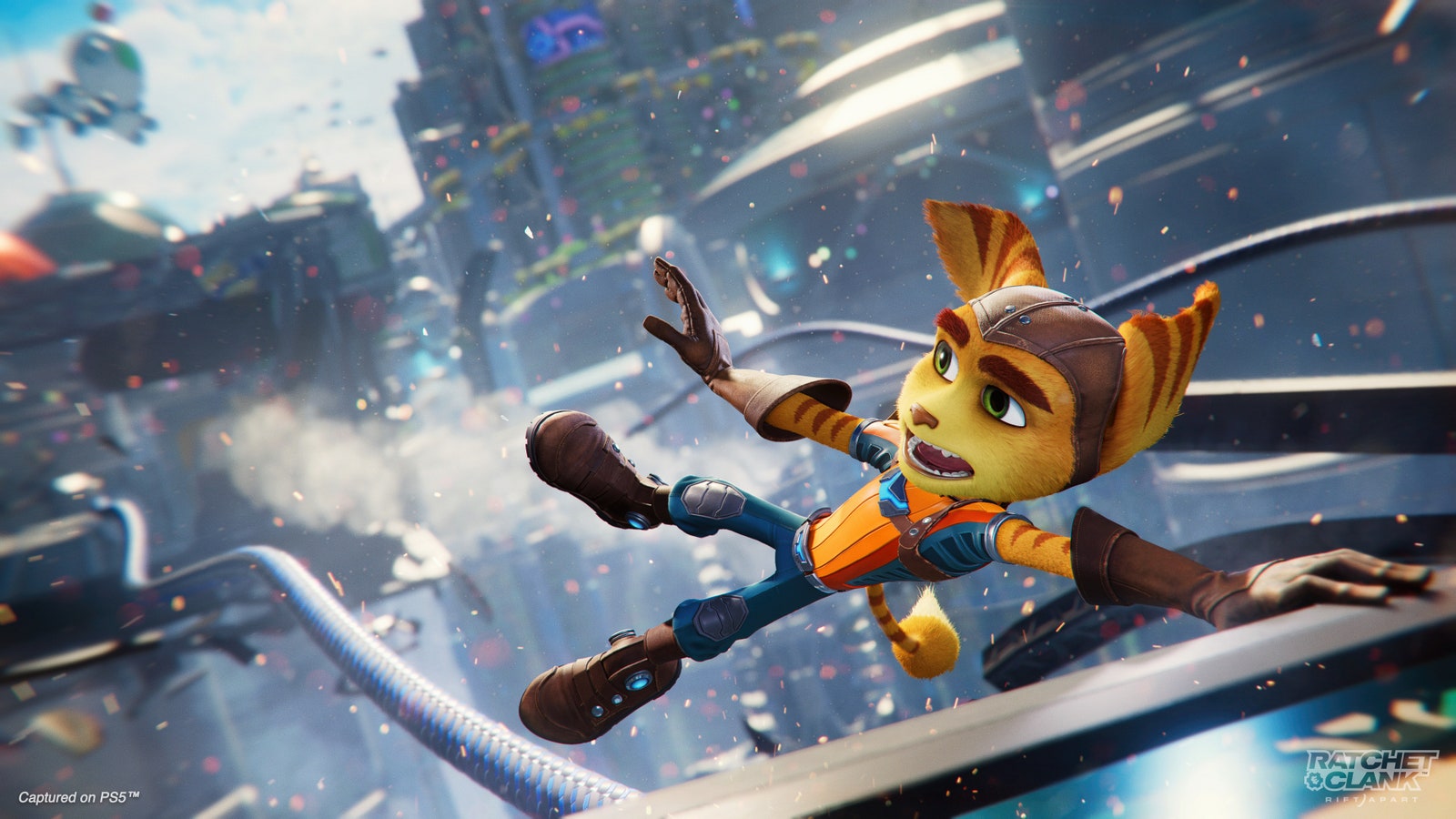 Lightning Rod pistol momentarily stuns enemies after firing, allowing you to maneuver when things get too congested. When you upgrade it to level 5, the Lightning Rod will see electric needles jump to other enemies upon death.  This weapon is good because it simultaneously stuns multiple enemies in place and covering a lot of ground.

The Drillhound is a missile launcher with the exception that instead of firing at enemies, it fires a hound that digs its way over to them and explodes in their faces. When you lock on to someone via L2, each round moves much faster, drastically minimizing the chance of your shots being intercepted. This weapon is good because it catches unsuspecting enemies off guard and safely unleashes a lot of high-damage shots.

Droid Repulsor is both a shield and a weapon, which pops up a protective barrier anytime you hold down L2 or squeeze R2 halfway, and is perfect for deflecting incoming fire. This makes the Droid Repulsor great for absorbing damage and allowing you to get up close and personal before unleashing a powerful wide-spread blast. It becomes Void Reactor when you upgrade it to level 5, which allows you to retaliate against opposing fire. This weapon is good because it offers a lot of defense against enemy fire so you can unleash up-close blasts.

All the enemies get frozen down instantly by a single blast from the Cold Snap gun. It works the same as the Topiary Sprinkler, with the exception that it allows you to target single enemies rather than firing a shot and hoping for the best. This weapon is good because it incapacitates enemies in place and has them slide over surfaces.

The Glove of Doom allows you to unleash a large number of chaos agents. True, rounds are few even after being fully improved, but these miniature combat robots can deliver a powerful punch if they are dispatched to attack close enemies. They will even accompany you for a brief time until the next surprise strike appears, distracting smaller enemies and allowing you to breathe while attacking with your other weapons. When you upgrade it to level 5, it becomes Apocalypse Glove. This weapon is good because it distracts and attacks enemies while you reload, retreat, or seek health.

The Buzz Blades are better suited to more relaxed players who simply want to aim in the general direction of opponents and connect with their targets. The result is a gun that isn’t quite as precise as the Lightning Rod or the Burst Pistol but slicing up bots with a swarm of blades has its advantages. The Buzz Blades will bounce off enemies and ricochet off the environment when you upgrade it to level 5. This weapon is good because it deals a minimal amount of enemy damage at a fast rate, and firing without aiming. 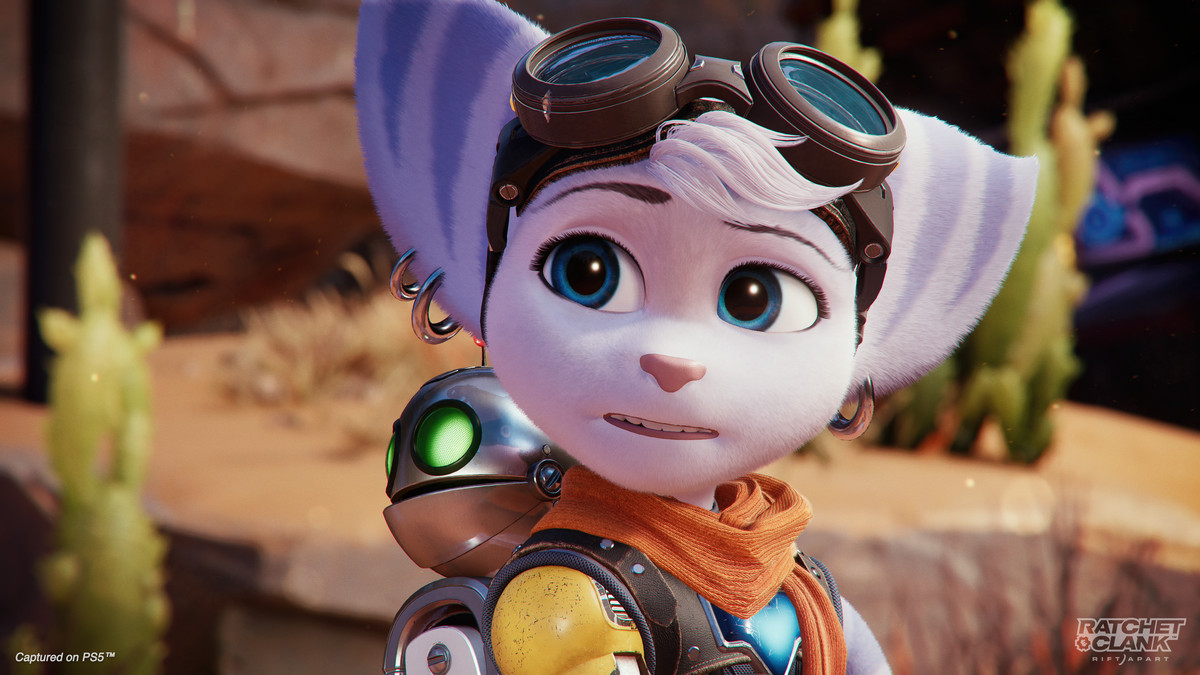 The Warmonger is the best choice if you want to do a lot of damage with a single R2 pull. It is a missile rocket launcher with little bells and whistles, but it doesn’t need them when it delivers a grafting punch to nearly every type of enemy, including mini-bosses. It becomes the Peacemaker with each rocked launched releasing a series of micro-rockets as soon as it hits its target when you upgrade it to level 5. This weapon is good because it gives the enemies an explosive thump from far away.

This weapon allows you to throw multiple bombs at a time, when this device is activated, it deploys a drone that will fly overhead and drop a stream of bombs in a succession. You will need precision and timing to use it properly which aren’t always possible in a Ratchet & Clank firefight. However, for crowd control, it can still be great. This weapon is good because it reigns explosive death over your enemies from above, provided they are in a straight line.

The Headhunter is Rift Apart’s version of a sniper rifle, allowing you to destroy far-away enemies while aiming from a first-person perspective. The Caveat is that it fires at a much slower rate than some of the other rifles in the game. However, the Headhunter also slows time when you upgrade it to level 5. This weapon is good because it picks off foes from afar and pops precise headshots.

The Blackhole storm is capable of firing a barrage of shots at any enemy you point it at breakneck speed. This means that if you don’t take a break from the trigger every now and then, it will quickly overheat, however, it’s a worthwhile trade-off considering how effective it is in fending off waves of enemies. As compared to other weapons the Blackhole Storm takes its time to spin up. This weapon is good because it piles on the damage rapidly within a very brief space of time.

The Bouncer is not accessible until you complete the game because it’s a challenge mode weapon. It’s just like a grenade launcher that releases projectiles that break up into smaller explosives when they hit the ground. Although this weapon isn’t interesting in the game it’s incredibly effective. This weapon is good because of AoE damage and dealing with large groups of small enemies.

Pixelizer is another challenge mode weapon that turns out to be surprisingly typical in terms of capability. The Pixelizer is essentially a shotgun with the added bonus of turning its victims into pixels. Even though it isn’t the best weapon in the game, it is a lot of fun to use. This weapon is good for Enjoying retro visuals/sound effects while dealing respectable close-range damage.

You will get RYNO 8 as a reward for finding all the 10 Spubots concealed across several planets. It’s essentially a built-in easter egg machine that pays homage to PlayStation history by opening rifts and dropping various items from the sky to create a massive explosion. The Thunder Jaw from Horizon Zero Dawn is among many other objects.

These are all the weapons that players can get in Ratchet & Clank Rift Apart.