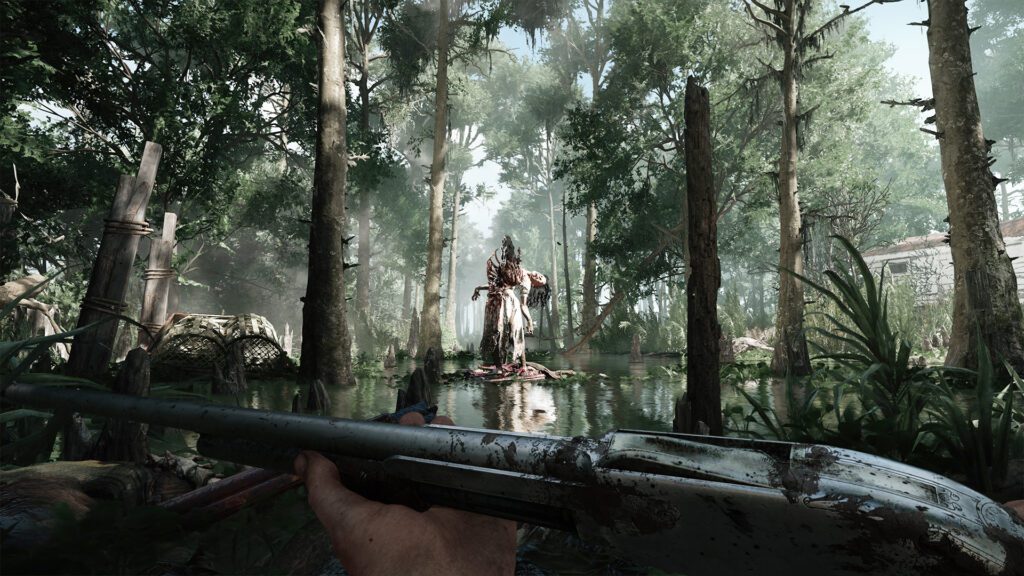 Hunt Showdown update 1.19 was released today by Crytek bring patch 1.5 to PS4 and Xbox One. The full patch notes can be seen below.

This update brings plenty of additional new content and it is one of the most comprehensive update released for the game by Crytek. One of the prominent new features is the ability to use Custom Ammo. This lets the player utilize the various ammo types for weapons. Other changes include bug fixes and improvements. Get the details on this update with the patch notes below.

With this update, we are introducing several new ammunition types that are available for nearly all the weapons in Hunt. These Custom ammo types are designed as a side-grade rather than an upgrade, offering a lot more variety as well as allowing players to tailor their loadouts even more to their playstyle.

No custom ammo type is meant to replace the default ammunition. While some may appear to have advantages, there are also downsides that must be considered.

For example, some ammo will have higher penetration values, but these come at the cost of reduced muzzle velocity and damage. Others will deal fire damage as well as instantly blow-up explosive barrels but will have a visible tracer and no wall penetration.

This allows these weapons to split their extra ammo capacity between two different ammo types for added flexibility.

Equipped ammo types can be toggled with the “X” button (default mapping) while playing.

Custom Ammo can only be replenished from the new purple Special Ammo Boxes and from Ammo Box consumables the player brought into the bayou.

As you may have noticed, some of the ammo types above are named after crossbow variants. These variants have sadly left us, but their legacy will live on with their Custom ammo Variants. Similar to the Single shot weapons (explained above) you can now pair up ammo types so whether you want normal bolts and Shotbolts, or Shotbolts and Explosive bolts – we got you covered. And now, you can also use these ammo types with your favourite legendary skins.

A large slot, medium ammo, lever-action hunting rifle. This weapon is a significant upgrade from its famous compact ammo 1873 cousin that also benefits from the Iron repeater and Levering traits. This means the 1876 is a very versatile weapon that sits comfortably in the center of the arsenal with an ability to take on most challenges that it encounters.

The rifle carries les ammo and lacks some of the punch that comes with other medium ammo rifles but what it lacks in punch, it makes up for with a very high muzzle velocity and large tube magazine.

The Winfield 1887 Terminus is a large slot, lever-action shotgun, with an impressive capacity of seven shells with five in the magazine, one in the elevator and one loaded directly, and benefits from both Iron Repeater and Levering.

The shotgun’s lever-action allows for a comfortable cycling rate during engagements, with the exposed action providing instant feedback on the type of loaded ammunition.

The medium barrel length produces decent effects at range, but the weapon still falls slightly short compared to some of the other longer-barreled shotguns.

The Winfield 1887 Terminus Handcannon is a sawn-off variant of the model 1887, its buttstock having been replaced with a shorter pistol grip making it a medium slot choice.

The removed stock naturally results in much stronger recoil, while the shortened barrel causes wider shot dispersion. However, the weapon only loses one shell capacity for an impressive six shots as most of the tube-magazine is retained.

Like with its parent, the 1887 handcannon variant also benefits from the Iron Repeater and Levering traits.

Developer Note:Unfortunately, decoys have not really played a significant role for quite a long time, so we wanted to make some changes to increase their versatility and viability in your loadout. Our idea is that players can use them to aggro AI and animals at a greater distance without revealing your presence. This may confuse your enemies who will generally expect the hostile target to be closer to the aggro noise, allowing for a surprise attack, or to use the distraction as a quick escape.

Developer Note:With this change to the hand crossbow as well as the addition of the new tactical ammo types such as the choke, chaos, and poison, we want to encourage its use as a more versatile tool in the players Arsenal. Please note you cannot dual-wield the hand crossbow.

Developer Note:It was important to us to fix several issues with the previous iteration of concertina wire, ensuring that we stopped some instances where it could be abused as well as making it more reliable to use and be countered by players.

We also felt that being able to take out your First Aid Kit and simply punch through concertina obstacles was a cheap and unrealistic tactic. The intention has always been to have players clear wires using the right gear, so now we are trying to establish some clearer rules to ensure this is the case.

While in some instances this might make it more challenging to clear wires, bringing (or looking for) the right tools can make a significant difference and overall allows for much easier obstacle clearing and yields more satisfying results when cutting through wire with heavy equipment, like Machete, Wood Axe, Shovel or Bomb Lance.

Developer NoteWe felt that these heavy doors were underutilized and a change that allows for more options when dealing with them would make for more interesting interactions. We also wanted to establish clearer rules what type of items players can throw the door slits.