There are a lot of new weapons to try out as you eliminate armies of bokoblins and other monsters from the realm of Hyrule are included in Part 1 of the Hyrule Warriors: Age of Calamity DLC Expansion Pass. While Link’s flails are entertaining to use, everyone wants to get their hands on the Master Cycle Zero.

Despite the fact that the motorbike is featured in the DLC Expansion Pass, you will have to put in some effort before you can use it as a weapon in the game. In this guide, we will help you to unlock the Master Cycle Zero in Age of Calamity.

How to Unlock Master Cycle In Hyrule Warriors Age of Calamity

You will have to complete requests and challenges at the EX Royal Ancient Lab in order to unlock the Zelda motorcycle. This is a ‘destination’ in Central Hyrule that comes with the Expansion Pass (all quests related to the Expansion Pass are labeled with the letter ‘EX’). Robbie and Purah will ask for specific things as well as the completion of objectives in the field, which will unlock a network of nodes and reward you with larger weapon slots, increased rune stats, and new weapons like Link’s flails or Zelda’s Master Cycle Zero.

The process is straightforward, just like the rest of the game. To unlock more nodes on Robbie and Purah’s network, simply follow the instructions and acquire the necessary resources. If you have completed the base game, you will probably already have a lot of the materials you will need. You can get the rest by buying them or whooping the necessary amount of monster butt to complete the prerequisites and progress.

Once you have obtained the necessary equipment, simply follow the branching road to the ‘Top Secret Request,’ and you will be able to unlock not only the Master Cycle Zero but also two different Varieties of the cycle. 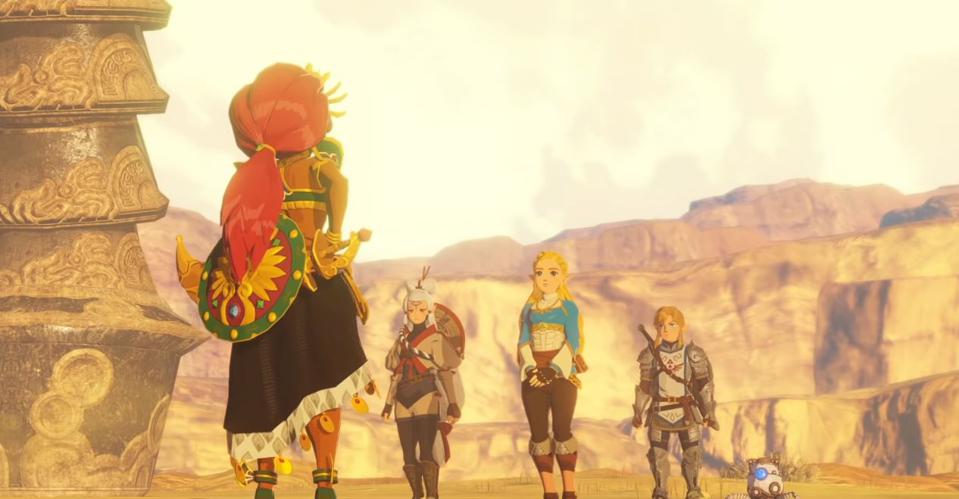 A ‘loo’ originating from the Top Secret Request nodes unlocks those versions while also increasing the Master Cycle weapons’ base attack strength.

In Hyrule Warriors, there are three variations of the Master Cycle: Age of Calamity:

See also  Fortnite Campfire Locations: Where Are Campfires and How To Stoke Them

New EX challenges and Quest will become available when you unlock new nodes. You will get more rewards from Robbie and Purah by completing challenges while completing quests will earn you new Master Cycle combos.  EX Quests are similar to Quests in the main game in that they all demand you to offer a set number of things in order to acquire new combos. Without needing to farm for more goods, we had all but one of the new Quest’s required items after finishing the game (we were missing half a dozen Sizzlefin Trout).

If your short on Challenge requirements (say, killing 1000 enemies with the Master Cycle Zero), remember that you can go back to the early chapters of the game – The Battle of Hyrule Field, for example – and kill hundred of easy grunts, earning you reward much faster than focusing on harder late-game enemies. You can also quickly discover the Challenge and Quest list by pressing the ‘L’ and ‘R’ buttons on the map screen. When the map is cluttered with icons and you can’t tell the forest from the trees, this feature comes in handy.

Commanding the Master Cycle Zero is similar to controlling any character, albeit slightly more difficult in close quarters. You move the left stick to go and attack using a combination of attacks on the ‘Y’ and ‘X’ buttons, as well as dodge on the ‘B’ button and the super move on the ‘A’ button that you earn by killing enemies.

See also  Returnal Save Data Explained: How To Save Progress In Returnal

The bike’s rune abilities are unique to it (for Remote Bombs, Stasis, Cryonis, and Magnesis). The ice staircase built with Cryonis rune is the most interesting of this new set a magnificent function similar to others you will find throughout the game.

The others are simply variations on the same over-the-top concept. We won’t go into detail since it’s unnecessary. They are good, though, so go check them out.

Overdrive which you activate by pressing ‘ZR, is by far the most intriguing Master Cycle skill. This provides Zelda a momentary boost in speed and attack, but it’s prone to overheating, so use it wisely to avoid a long cooldown.

The ultimate reward for finishing the DLC Expansion Pass in the legend of Zelda: Breath of the Wild was a really awesome Divine Beast/motorcycle/horse hybrid vehicle that Lik could summon at any time and ride across Hyrule like a boss.

“A vehicular weapon created by the Royal Ancient Lab, based on a Divine Beast destined for a hero, as described in an ancient text. As per Princess Zelda’s wishes, she is the pilot of this creation.”

That’s everything you need about how to get the Master Cycle Zero in Hyrule Warriors: Age of Calamity.